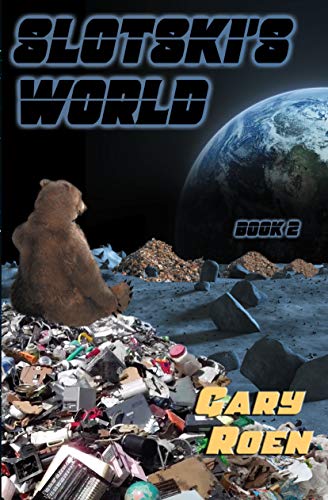 1 If you were pitching this book idea to a publisher what would that pitch be? Include your logline.

My pitch for my collection of Journey and Slotski’s World was that this is science fiction with a bit of a different take on the stories as the character Slotski is a teddy bear unlike any that we all know and love. He is fierce-looking with claws on hands and feet, fangs and what looks like gums with blood and he is very tall and always begins a story on a trash can or pile. There is something that lives inside of him that helps the people who pick him up or he rights a wrong when someone else takes him with him

2 What was an early experience where you learned that language had power?

I first learned the power of words in junior high school at Cathedral (no longer in business a private school) in classes where Dr. John Shank played the plays of Shakespeare and we read classics of The Yearling, Lost Horizon, and others, as well as I, got in trouble in science class for reading Live and Let Die Ian Fleming’s second James Bond novel. Then in Boone High School in writing class, Mrs. Cox did not like a story I wrote. I had to do another one and was almost kicked out of school in my senior year for that one.

3 What was your favorite part about writing this story? Include any ritual or a special place you write when you begin your day in the answer.

I enjoy writing the Slotski stories because they always come from something I have seen, heard or know about. For example, in Traces in Slotski’s World, this is the opening paragraph. “Stacey and Myron Beagle loved their residence in Christmas Florida, until one day when they returned home from shopping in Titusville to find it completely gone.” The storyline came from a news story I saw on a local station about a couple in Texas who found their home completely gone. I took that and came up with a reason that brings Slotski into the lives of Marvin and Stacey. I watch the news on many stations and take notes. I also have note pads that I take with me and have in the car. In the case of “Chain” also in this collection. I saw a woman walking. After I passed her, I stopped on the quiet street to make some notes. For the story “Smarty Marty” in Journey, I had a funky phone that got me thinking about a phone that has something happen that makes it come alive that causes problems for its owner.

4 Tell us about your main character in Slotski’s World: Slotski.

Slotski came very simply from the time I worked in market research in one of the malls we have here in Orlando. I saw the teddy bear I have described then began the whole series with the first story Slotski Bear. I explain in that story how he got his name. I never thought there would be other ones but a short time later I wrote the second one “On the Pile Again” It was to be a more serious story but changed as I began to write it that turned out to be much lighter in tone. I based “Cats Cats Oh My on a story that had appeared in the Orlando Sentinel about a woman in a neighborhood who was feeding the strays. I also felt it was a good way to make fun of the collection I coauthored Cats Cats and More Cats. The prologue in Journey came from a suggestion from my publisher to introduce Slotski better so with each collection I have one. Slotski’s World also lets readers have an idea of what he really is. I wanted something that was also catchy for his name and the process in the first story is what I thought up as I was toying with names for him.

5 How much research did you do and what type? Include the most interesting or most unusual.

I do a lot of research in different ways. Sometimes I am on the computer looking up things, or I am at a phone store asking questions of people who work there about phones and devices, talking to people that I meet who work in different professions, and “Traces” marked the first time I used my phone to research a place I have in that story. In the “Vivisection” I asked women if this was the end of the world what would be most important to you? Clean underwear. So, it is included in the story. For “Soul Mate Man” I overheard two women talking about a swimming pool party one was asked to attend. She answered I will be there but not go swimming. When asked why she said because my suit will get wet. Sometimes people’s responses are too good to pass up. I am always using things. In “To the Rescue in Journey the scene I describe of two nurses doing the limbo took place while I was visiting a friend in one of our medical centers. What I wrote is what happened.

6 What was the most significant thing you learned writing this story? Your take away in your own personal growth as a writer or person.

I have learned a lot of things I was not doing as a writer. Readers can see in Journey two different styles of writing because I went back to the University of Central Florida and learned my craft better with the professors Pat Rushin and Susan Hubbard. I would describe but not use dialogue or other things. The early stories are further in the collection. In Slotsk’s World, I tried many different things in description like “Traces” or an even better exercise was in both collections the 66-word stories. Many writers have trouble telling one in one so short. Until I wrote “Identity Theft.” I had only heard of collections of 99 words by other science fiction writers.

7 How many books and series have you written?

I have written two collections science fiction Journey and Slotski’s World that is the Slotski series so far, two titles of poetry Look at Me World (out of print) and The Forgotten Father Coping With Grief., a short story in the collection Computer Legends Lies and Lore, and co-author of Cats Cats and More Cats as well as a play that was performed on stage named Vamp and hundreds of book reviews, articles in publications for over 40 years.

8 Tell us a bit about your journey as a writer?

I wrote poetry for publications then started doing reviews that have covered books, movies, and even ballet. Some of the time I have also done articles for other publications on a wide range of topics including staying focused on what you want in life to the world of publishing. I have been many different things and learned from all that I have ever done. Other writers can do the same thing.

9 Any advice for aspiring or new writers?

Continue to write, talk to people about all kinds of things, join writer groups and learn from them also which ones are good by their comments. Here are examples. When someone says I would not write it that way ignore them but the ones who say try this or you are on the right track but not quite there. Go to conventions in your area and events for writers like signings at book stores and libraries. Know you can get there but it takes time and patience.

10 Any last words for our readers?

Look for all types of writing to do. That includes weekly papers and monthly publications because it gives you the experience of writing for deadlines, gets your name out to the public, gives you writing credits and helps you learn different ways to research.

He is the author of two books of poetry. The Forgotten Father Coping With Grief (Taylor and Seal Publishing), and Look at Me World (Chateau Publishing).

His work has been included in the short story collection; Computer Legends Lies and Lore (Ageless Press) and online magazines including, Anotherealm, and Mercury Sky. He is also the author of a satirical play entitled “Vamp.

Roen is also a nationally syndicated book critic/writer, a consultant who has been writing close to 45 years.

Over the many years of his career, Roen has been a book salesman, as well as a publicist, for several publishing houses. He has been an agent working with authors and publishers in the true-crime field.

He has been a regular on-air contributor to many different types of radio and TV shows throughout the United States. For a number of years, he worked for numerous companies in the field of market research, in Central Florida, as an independent contractor. This gave him many diverse experiences, that have often found their way into much of his fictional stories.

OTHER BOOKS AVAILABLE BY GARY ROEN