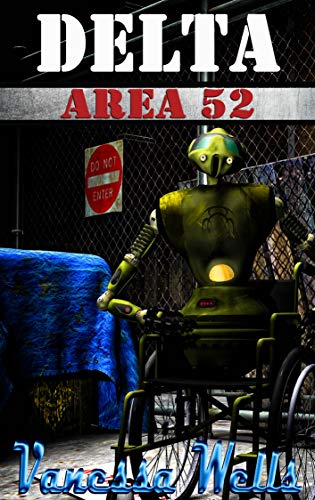 When Gwen and the team at Area 52 are called to pick up a robot of obvious alien manufacture, it seems like they might be in for an easy mission for once.

Unfortunately, things quickly go downhill when the robot is activated and the crew realizes that there are juvenile aliens from the planet Vela stranded on Earth.

Worse, the little aliens are worth much more than gold, and there are deadly alien mercenaries that are determined to find them first.

Vanessa Wells Alpha, the first book in the series, is also FREE today! It’s sitting at #19 in it’s category on Amazon! https://www.amazon.com/ALPHA-Area-52-Book-1…/dp/B07KVCQFTS

I began my literary life as a writer of fantasy; it was one of my first loves, after all. My childhood was steeped in dusty books of fairytales and mythology that I liberated from the shelves of libraries and my mother’s collection. I own a red leather-bound edition of Lord of the Rings, and I can honestly admit that if my home were to flood, only my laptop and the cat would be saved before it (my child is both six feet tall and a strong swimmer, so I have little to worry about on the human side of things.)

So, when I decided to write the Area 52 series, after spending a number of years writing about magic in its various shapes and forms, no few people asked me this question: Why sci/fi?

I am (and always have been) a seeker of fantastic stories. It’s what attracted me to reading fantasy, and why, when I was very young, I was tricked by the presence of dragons into reading Anne McCaffery’s Dragonriders of Pern series. Stories with dragons imbodied the fantastic. But she was a sneaky little devil, and fairly early into the series, one realized that Pern was not all that it seemed; that I was not reading fantasy, but a totally different genre: science fiction.

Now, please understand, I had nothing against science fiction. I’d read Jules Verne and H.G. Wells (I was rather fond of H. G. in fact, and went out of my way to see if the two if us were related; which sadly, wasn’t the case). But most science fiction dwelt too much on the techno babble and I just wanted the story. McCaffery changed that for me. Her stories were character-driven and while she had plenty of well-researched ‘cool’ science in her books, she never let it get in the way of spinning a good tale.

I knew from the moment I decided to write that I wanted to play in science fiction as well as fantasy. There are just so many stories that you can’t tell in any other genre! My idea of success, as a writer, is to tell tales that inspire new ideas; ones that highlight the beauty and possibility in life. Appreciation of the fantastic is always my deepest theme; it might be the wonder of seeing magic up close, or the rush of exiting the Earth’s atmosphere for the first time…or just the fleeting beauty of a flower as it goes through it’s life cycle.

And the Area 52 series is a lot of fun to write. The idea came to me in episode format; I knew that it would never be one big book from the minute I scratched out the idea for a class I was taking. As the story emerged, I knew that this was a story I wanted to write….had to write. The characters meant a lot to me: Meg, the lonely scientist with the vulnerable heart and the secrets even she doesn’t know; the General with so many years of secrets she’s hidden, , hard-boiled Hutchens, Green with his surprising moments of depth, which shouldn’t surprise anyone, and the AI who is somehow one of the most human characters. And Pollux. Don’t even ask me what I was thinking when I created him. He just showed up one day and demanded a part. You shouldn’t have favorite children or favorite characters, but I have to admit, Pollux is one of mine. When I write, his voice is distinctly British (which actually works into his backstory). He’s snarky and funny, and he knows that life isn’t fair, but it never stops him from trying to make the world around him better. He loves deeply, but he’s alone and will always be alone because he’s the last of his kind…and his kind are very long-lived so he’s going to watch the humans he loves live and die for generations. I didn’t set out to create him – I’m not even sure I did create him.

That’s why I write science fiction. I need the characters. I need their stories. I want to know what happens and how this glorious mess I’ve created in their world will play out.

It’s pretty much the same reason I write anything at all.

Vanessa lives with her family deep in an enchanted forest (in Texas). Her hobbies include writing, drinking tea and coffee, reading, writing some more, and cooking. She battles daily infestations of plot bunnies…and dust bunnies, but that’s another matter entirely.

Vanessa is the author of the Seventeen Stones Trilogy, the Topeka Texas Chronicles, and the AREA 52 science fiction short story series. (Delta is coming September 6th!)

She is a contributor to the anthologies Adventure of Creation and Ye Olde Magick Shoppe, and editor for both Trick or Treat and Spirit, and co-editor for Grumpy Old Gods volumes 1& 2.

She is currently editing a new anthology called Grumpy Old Gods Volume 3 (coming in Fall 2019!) with Juneta Key and working on the next story in the AREA 52 series, Epsilon.

You can find them all on Vanessa’s Amazon Author Page